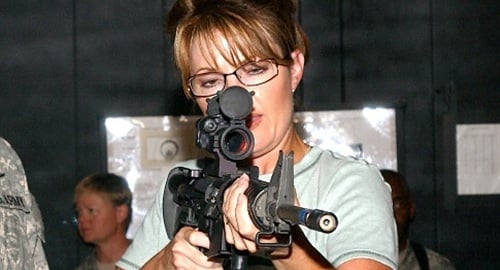 Sarah Palin wants to hunt black people. However, before you sissy liberals get your pretty pink lace panties in a bunch you should know it will simply be a tag and release hunt. They do it to wildlife in Alaska all the time!

According to sources at the US Patents Office, Sarah Palin has applied for a patent on “tracking devices outfitted to look like bling”, with the specific use of “tagging and tracking the movements of black people.”

Now I can already hear you hippie beatniks getting ready to use the race card, but before you do know that on the patent application Sarah Palin specifically acknowledges that not all black people are bad, stating in the notes section that, “while not all black people are criminals .. all criminals are either black or were inspired by black music.”

From what we can determine by the crude sketches on the patent application the way Sarah Palin’s tracking system would work is like this. Law enforcement would enter lower income neighborhoods. They would draw out the blacks with scantily clad fat white women dancing to hip-hop music. The blacks would then be humanely tranquilized and tagged using Sarah Palin’s patent pending “BlackTracker 2000” technology and their information will be entered into a national database.

Sarah Palin hopes that not only will this tracking system be an invaluable resource for law enforcement, but also for the scientific community who for the first time will be able to study the movements of blacks unencumbered by the threatening taunts of “what are you looking at cracker”.

Law enforcement in Arizona has already expressed an interest in beta testing the system.