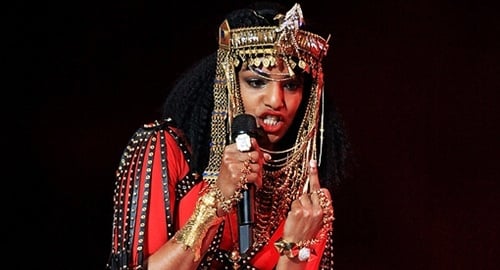 Proud Muslim superstar M.I.A. crashed the halftime show at the Super Bowl and gave the American people the finger.

As you can see in the photo above taken at halftime during the Super Bowl, M.I.A. (Muslimina Infiltrating America) totally upstaged the old hag and Zionist shill Madonna by giving the finger to the millions of fat American slobs sitting at home watching the game.

What a credit M.I.A. is to the Muslim religion! Not only does she do an hilarious impression of a kuffar “urban” woman rapping, but she uses this talent to infiltrate infidel culture and tell the American devils to go f*ck themselves. M.I.A. truly is an inspiration to Muslims everywhere. Allahu Akbar!