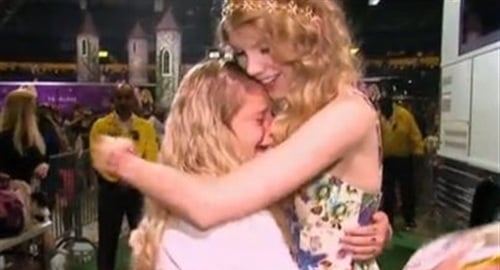 In one of the most shocking displays of hubris that the world has ever seen, egomaniac Taylor Swift held a 14 hour lovefest in which her fans came to worship her.

Taylor Swift has always been arrogant and self-absorbed but this is a new low for her. For Taylor to want to be praised for 14 straight hours just because she sings a few catchy songs about girls getting fingered behind their daddy’s barn is blatant blasphemy.

It is obvious that Taylor Swift is a dangerous sociopath and is probably planning on forming a cult. Unfortunately for Taylor the Qur’an is very clear that all none believers must be met with force. Allah’s armies will triumph over her gang of preteen “Swifties” as they lack the upper body strength to properly wield a Saif .

The video below are clips from Taylor Swift’s lovefest in which you can see Taylor try to feed her insatiable appetite for adoration.